A diminutive Queen raises her arm in a Hitler salute and bakes swastika-shaped cookies. Princess Diana is in bed alongside two men with Down’s syndrome. Camilla has animal blood thrown at her.
In his latest Berlin performance Christoph Schlingensief underlined his reputation as the enfant terrible of the German art world – and now the storm of controversy is about to hit London.

Images from the blood and vomit splattered stage production Kaprow City will form part of his new art installation. The piece, Last Hour, will be shown in a warehouse gallery in east London next Tuesday, he told the Guardian.

Described by its creator as a shrine, the installation features the twisted metalwork of a crashed car and three films, including footage of a long tunnel and paparazzi-style stills of „Diana“ taken from the contentious Berlin show. 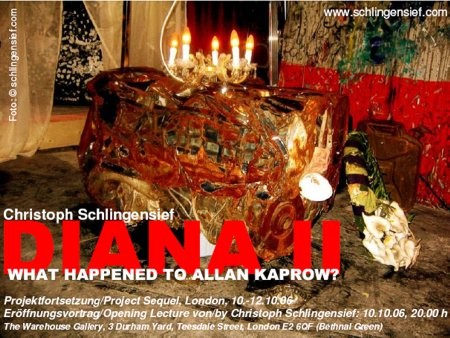 „It is not meant as an attack or a provocation,“ Schlingensief insisted in an interview with the Guardian. „I am just fascinated by how Diana has become a modern icon, a myth. Conspiracy theories and speculation have created a mysterious figure. It’s hard to separate myth from reality.“

But what the 46-year-old German artist and filmmaker intends as a comment on the public obsession with the Princess of Hearts has been given the cold shoulder by the London art world.

The Diana-themed piece was originally destined for Regent’s Park as part of the Frieze Art fair – which runs from October 12 to 15 . But, after negative publicity, the organisers distanced themselves from the installation, telling news wires that „along with other works, it is not allowed“.

Schlingensief said a number of large galleries backed off from showing his work, fearful of denting their reputations. „I’ve exhibited in many countries but I’ve never seen anything like the sensitivity of England to the Diana theme. It’s genuinely caught me by surprise,“ said the seasoned provocateur. „It’s all about memorials to the princess and planting trees to remember her. Leading galleries seem frightened of the tabloid reactions. I thought Islam had a strict approach to images, but England seems to have even tighter controls.“

For want of a bigger space, the Last Hour will now be shown in a gallery space in Bethnal Green on October 10.

Adding to the controversy, Schlingensief said the car wreckage used in the installation is part of the actual Mercedes which crashed in August 1997, killing Diana, Dodi Fayed and their chauffeur. The Stevens inquiry into the car crash has rejected such claims, saying that they are still in possession of the vehicle.

Schlingensief strongly denies that he capitalises on shock and publicity stunts – even though he has made his name by walking roughshod over taboos, etiquette and convention.

Berlin public opinion was sharply divided following his Diana-themed stage show. Both boos and laughter sounded above the applause after Kaprow City’s debut, which was appropriately staged at Berlin’s Volksbühne – the most radical theatre in the city.

The tabloids were indignant. „It was Big Brother meets Buckingham Palace … Princess Diana did not deserve this and nor did we,“ sniffed Berlin’s BZ daily. But other theatergoers saw the funny side. „I don’t know what he was trying to say, but it certainly wasn’t dull,“ said a young woman at the premiere.

Among the memorable scenes, an anonymous kilted Scot had his pubic hair shaved and a woman recounted being given electric shocks. At another point a mentally disturbed woman vomited, doubling over the toilet while being held by Princess Diana.

Schlingensief denied media reports that he had sent Prince William and Harry invitations to Kaprow City’s premiere and they were „distraught“ about the play, which ends with Diana being wrapped in plastic when she died.

„Those kids have lived through so much that they can certainly differentiate between their real mother and media versions of her,“ he said, adding that the princes themselves had generated controversial headlines, such as when Harry donned a Nazi uniform.

In the German-speaking world Schlingensief is famous for toying with German post-war sensitivities in films like The Last Hours in the Führer’s Bunker.