The Art of Christoph Schlingensief at MoMA PS1

In 1998 the German artist Christoph Schlingensief organized the Last Chance Party, a deliberately absurdist mix of art and politics that encouraged ordinary people to nominate themselves as candidates for the coming parliamentary elections.

One of the party’s campaign events took place at Lake Wolfgang in Austria, where Helmut Kohl, the chancellor at the time, had a summer home. Mr. Schlingensief called on Germany’s six million unemployed people to swim in the lake all at once, the idea being that they would raise the water level enough to flood the chancellor’s home. As it turned out, only a few hundred people turned up — journalists and police officers, mostly — but you couldn’t say the event was a failure, for by means of it, Mr. Schlingensief put into circulation a vivid metaphor about the potential power of democracy.

Many other similarly amusing and inspirational stories are told at MoMA PS1 in “Christoph Schlingensief,” a persuasively hagiographic survey of the amazingly adventurous career of one of Germany’s most celebrated artists of recent times.

Organized by Klaus Biesenbach, director of MoMA PS1; Anna-Catharina Gebbers, an independent curator; and Susanne Pfeffer, artistic director at the Fridericianum, in Kassel, Germany, the exhibition consists mostly of documentary photographs, video clips and explanatory wall texts arranged in chronological order. Mr. Schlingensief (1960-2010) may or may not have been a great artist — it’s hard to say. But, if you judge by this show, he was certainly a galvanizing personality. 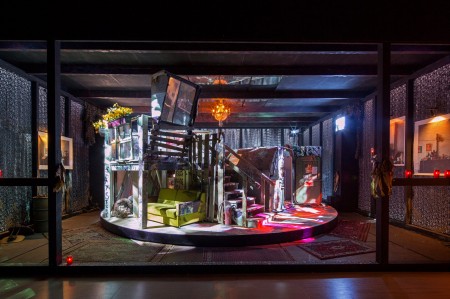 He was a charismatic performance artist and natural-born comedian, not to mention boyishly handsome: The Hollywood biopic would have to star Jim Carrey, whom he physically resembled. But more important, he was the catalytic director of potentially explosive situations in conventional theaters and in nontraditional settings. His genius was to zero in on, and run roughshod over, the fault lines of politely conformist society with hilariously outrageous élan. Imagine a merger of Joseph Beuys and Andy Kaufman.

Mr. Schlingensief started out as an auteur of farcical, politically incendiary, low-budget cinema. Four of his best-known early films are simultaneously projected in one gallery at PS1. Three belong to “The Germany Trilogy,” a series that includes the hysterical, self-explanatorily titled “100 years of Adolf Hitler — The Last Hours in the Führer’s Bunker” (1989); “The German Chainsaw Massacre” (1990, released here as “Blackest Heart”), in which a butcher’s family turns people into sausages hours after the reunification of East and West Germany; and “Terror 2000 — Intensive Care Unit Germany” (1992), which is about neo-Nazis and opportunistic journalists and politicians.

The fourth, one of his last feature-length films, is “120 Days of Bottrop” (1997), about an inept director’s effort to remake Pier Paolo Pasolini’s “Salò, or the 120 Days of Sodom” (1975). To watch any of these wildly antic movies for a few minutes is to regret his retirement from filmmaking.

In the late ’90s, Mr. Schlingensief plunged into his anarchic, Brechtian-Beuysian brand of theater, causing near riots on occasion. A high point was “Please Love Austria,” a reality television show parody that was his official contribution to the 2000 Vienna International Film Festival. Mr. Schlingensief and his team constructed a village of shipping containers and had it occupied by 12 people from other countries who were supposedly seeking asylum in Austria.

Webcams broadcast their activities to spectators, who were encouraged to vote out those they disliked. This provoked a storm of indignation. At one point, protesters, who may have been plants, stormed the village in an effort to liberate the asylum seekers.

By that time, Mr. Schlingensief was already a figure of considerable celebrity and notoriety, thanks to several popular television projects. Broadcast in 1997, “Talk 2000” was a talk show with celebrity guests in which Mr. Schlingensief interrupted interviews to discuss his own personal problems or suggest that they all take a brief nap together.

Three years later came “U3000,” in which he and his crew were filmed acting crazily on platforms and in cars of the Berlin subway system; it aired on MTV. And then there was “Freakstars 3000,” a six-part parody, “American Idol”-style, in which two dozen people from an assisted-living home for the mentally disabled competed for spots in a new band. Excerpts from all of these shows are presented on monitors in one room of the exhibition.

Mr. Schlingensief produced the exhibition’s one major sculptural work, “The Animatograph,” in 2005-6. Presented in a dark room, it’s a revolving carousel that viewers may enter and explore. Its Halloweenish two-story labyrinth of cramped, grungy spaces, illuminated from within and without by spotlights, has a portentous gloom that calls to mind the dour Expressionist painter and sculptor Anselm Kiefer. A video in which Mr. Schlingenseif explains a diagram of the sculpture is more amusing; it’s like Beuys channeled by Prof. Irwin Corey.

Maybe the most surprising turn in Mr. Schlingensief’s career came in 2004, when he produced Richard Wagner’s “Parsifal” for the Bayreuth Festival — or maybe not so surprising, considering the interest he shared with Wagner in the idea of the Gesamtkunstwerk, or the total work of art. His setting of the opera in Namibia and translation of its medieval symbolism into African tribal imagery, combined with his chaotic mix of live performance and film projections, reportedly elicited an equal mix of boos and cheers from the opening-night audience.

What may ultimately be his most lasting contribution to humanity is a nonprofit project called Opera Village Africa, in Burkina Faso, in western Africa (between Ghana to the south and Mali to the north), which he initiated in 2008, around the time he learned that he had lung cancer, which would kill him in 2010. (He was a nonsmoker.)

Still under construction and under the direction of Mr. Schlingensief’s widow, Aino Laberenz, the Opera Village will center on an opera house, with surrounding buildings for art, education and health programs, all designed by Diébédo Francis Kéré, a Burkina Faso-born architect. For his final act, the troublemaking holy fool turned into a pragmatic humanitarian.