Throughout his life, Christoph Schlingensief (1960–2010) transgressed artistic, material and institutional boundaries in his oeuvre, which spans film, theater, opera, performance and installation. The effect of this exciting and versatile body of work unfolds through continuous fragmentation, synchronicity, the dissolution of boundaries, and its inter- and trans- medial character. His films, theater pieces, and performances serve as comments on and reactions to the social contexts from which they emerged, touching on topics such as fascism, German history, religion, the institution of the family and media representations of current events. His radical demand for reaction and almost obsessive overexertion and challenging demand for dedication from anyone involved in his projects secure Schlingensief’s exceptional position in contemporaneous art discourse. 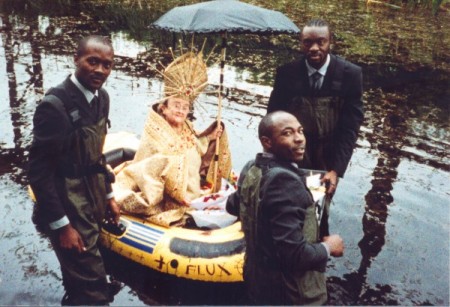 Not beholden to any one medium, Schlingensief insisted in moving between genres and disciplines. Whether creating films about recent German history, establishing his own political party, or building a reproduction of his childhood chapel, Schlingensief engaged deeply with his cultural and artistic milieu.
He directed plays by Shakespeare and operas by Wagner, and was profoundly influenced by Joseph Beuys, Rainer Werner Fassbinder, and the Viennese Actionists.

Christoph Schlingensief has had numerous solo exhibitions at such institutions as Haus der Kunst, Munich; Museum Ludwig, Cologne; and Migros Museum, Zurich. In 2011, he posthumously represented Germany at the Venice Biennale and was awarded the Golden Lion for Best National Pavilion.

Christoph Schlingensief is organized at MoMA PS1 in collaboration with KW Institute for Contemporary Art.

The exhibition is organized by Klaus Biesenbach, Director, MoMA PS1 and Chief Curator-at-Large, The Museum of Modern Art, Anna-Catharina Gebbers, Independent Curator, and Susanne Pfeffer, Artistic Director at the Fridericianum, Kassel; in collaboration with Filmgalerie 451, Berlin.

The exhibition is made possible by a partnership with Volkswagen of America.

Special thanks to Bumat Turntables, Germany.