BERLIN: Despite their efforts to recruit music for their twisted beliefs, the Nazis managed to decimate in short order the thriving and stylistically diverse musical life that flourished in Germany when they came to power. Tonally oriented music by composers such as Erich Korngold, Franz Schreker and Alexander Zemlinsky, it is sometimes said, lost out twice: first, when it was proscribed due to the composers‘ Jewish origins, and, second, when the dominance of atonal music after the war rendered theirs out of fashion. 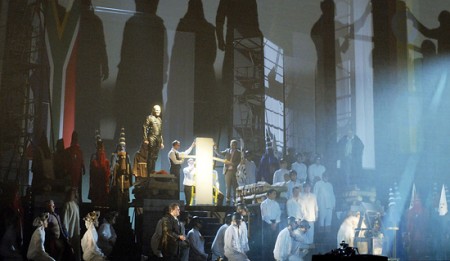 Fortunately, these composers now have well-positioned champions, but few exhumations can rival in scope the Deutsche Oper Berlin’s current undertaking, the first-ever staging of Walter Braunfels’s „Jeanne d’Arc – Szenen aus dem Leben der Heiligen Johanna“ (Joan of Arc – Scenes from the Life of St. Joan), a grand operatic canvas of wartime suffering and hope. Unlike colleagues who emigrated or perished in the Holocaust, Braunfels remained in Germany, left alone as a recluse at his vacation home on Lake Constance, where he wrote „Jeanne d’Arc“ in 1938-43 with no prospects for performance. He had been dismissed from his post as director of the Cologne Conservatory in part because his father was Jewish but also because, according to the charge, „he waged a bitter war against all those whom he discovered to be members of Adolf Hitler’s movement.“

Before 1933 he was among Germany’s most popular opera composers, probably third behind Richard Strauss and Schreker. His opera „Die Vögel“ (The Birds), a magical reincarnation of Aristophanes’s comedy, triumphed at its 1920 Munich premiere under the baton of Bruno Walter and swept other German opera centers. But „Jeanne d’Arc“ is manifestly the product of another time. The intersection of war and faith in the Joan legend clearly appealed to Braunfels, a devout Catholic who fashioned his own libretto. It is rich in ambiguity on account both of Joan and the men around her.

After her victory against the English, Saints Catherine and Margaret, who were her initial inspirations, command that she follow Christ. Inclined to do so, she nevertheless disobeys – possibly reflecting Braunfels’s own doubts that events necessarily happen in accordance with God’s will – although she returns to the fold. Most interesting among the men is Gilles de Rais, whose future as a rapist and murderer of children is touched on but who is devoted to Joan, even if dubious of her godly allegiance. When no miracle spares Joan from her incendiary death, Gilles exclaims, „Satan, you have won.“ Yet soon we learn that her heart did not burn – a small nugget to sustain faith.

Tellingly, the music at the close is relatively subdued, with nothing like the majestic dotted rhythms, grand choral utterances and onstage brass that mark Joan’s earlier triumphs. Rarely, if ever, does the music cut loose from its tonal moorings, but biting dissonance, as befits the subject matter, is more prevalent than in „Die Vögel.“ Devotional scenes are melodically simple, often embroidered by woodwinds yet spiked by an ever-present chromaticism. The music can be opulent and rich, but its apparent genuineness prevents it from sounding over the top.

„Jeanne d’Arc“ was the brainchild of the producer Christoph Schlingensief, whose illness earlier this year necessitated that his blueprint for the staging be implemented by others. Like his controversial „Parsifal“ for the Bayreuth Festival, which was retired last year, it is heavily dependent on projections, sometimes repulsively showing what appear to be maggots or other primitive creatures but otherwise so diffuse in content as to defy description. The stage is scarcely less active, with epileptics, several midgets, a row of pigs strung up on racks, a spastic dancer and people in wheelchairs all having their due. Fortunately, Schlingensief ensures that the principals behave in accordance with the dictates of the drama, but to my taste the stage business could have been reduced by 50 percent.

The soprano Mary Mills gives a vibrant, emotionally fraught performance in the taxing role of Joan, with the baritone Morten Frank Larsen, in rich, dark voice, a force to reckon with as Gilles. Dressed in papal attire (costumes by Aino Laberenz), Ante Jerkunica, a bass, projects both sympathy and authority as Joan’s father, and the baritone Lenus Carlson resolutely delivers the pronouncements of the Duke of Trémouille, grateful for Joan’s accomplishments but wary of her effect on the people. Paul Kaufmann is endearing as Joan’s childhood friend Colin, who reappears bearing a bouquet for Joan only to be overshadowed by Gilles, and Julia Benzinger, as Saint Margaret, impresses with her luscious mezzo. The conductor Ulf Schirmer ably negotiates the complex score abetted by strong orchestra and choral performances. Time will tell whether „Jeanne d’Arc“ will have the appeal of „Die Vögel.“ But there is much to the opera that a single hearing can only begin to uncover.